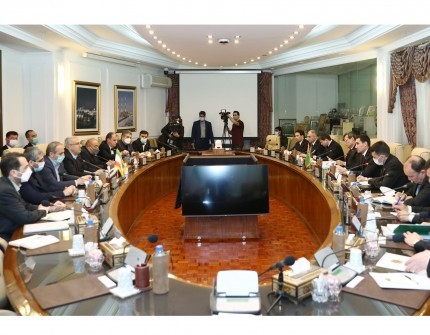 The government delegation of Turkmenistan visited Iran in accordance with the instruction of the Turkmen leader. The delegation is led by Vice Prime Minister Serdar Berdymukhamedov and Turkmen Foreign Minister Rashid Meredov.

On the first day of the visit, January 8, 2022, energy-related issues were addressed in Tehran. The Iranian side was represented at the talks by Javad Ouji, head of the Ministry of Petroleum.

The economic group of the news agency Seda Wasima reports that the minister said the Iranian side is ready to transfer 40 million cubic meters of "blue fuel" daily or about 10-15 billion cubic meters during the year. The statement referred to the gas swap supplies from Turkmenistan to Azerbaijan via Iran, which started in 2022.

According to the head of the Iranian Ministry of Oil, the sides will sign a number of documents, preparation of which was entrusted to experts of Turkmenistan and Iran. The agreements cover mutual cooperation in oil and gas development. According to Ouji, the sides seek not only to revive the gas contract but also to increase swap supplies. Other aspects of energy trade will be discussed as well. The talks also touched upon engineering and technical cooperation and production of oil products.

The Iranian mass media reported that thanks to swap supplies of gas from Turkmenistan, Iran avoided a gas crisis, which could have been caused by a shortage of this fuel, as well as a drop in pressure in the gas transportation system located in the northern regions of the country - primarily in Mazandaran province.

The Seda Wasima news agency also reports that Turkmen leader Gurbanguly Berdymukhamedov will soon visit Tehran, where he will meet with his Iranian counterpart Ebrahim Raisi.

On the same day, the Turkmen delegation held talks with the head of Iran's Ministry of Roads and Urban Development Rostam Ghasemi. The key topic of this conversation was interaction in such areas as transport and communications, fuel and energy and industry. In particular, the issue of increasing the volume and expanding the geography of interstate and regional rail and road transport was touched upon.

The deputy prime minister of Turkmenistan stressed that Iran is one of the key partners in the trade and economic sphere. And the Turkmen-Iranian intergovernmental commission for economic cooperation plays an important role in developing mutually beneficial activities. In October 2021 it held its 16th meeting.

Representatives of Turkmenistan also met with the First Vice President of Iran Mohammad Mohber and Iranian Foreign Minister Hossein Amir Abdollahian. The main topic of these meetings was bilateral and multilateral partnership. The parties noted the similarity of their views on major issues of global and regional politics and the high level of Turkmen-Iranian cooperation.

The participants of the meeting expressed their desire for further development and strengthening of multi-vector partnership relations between Turkmenistan and Iran.