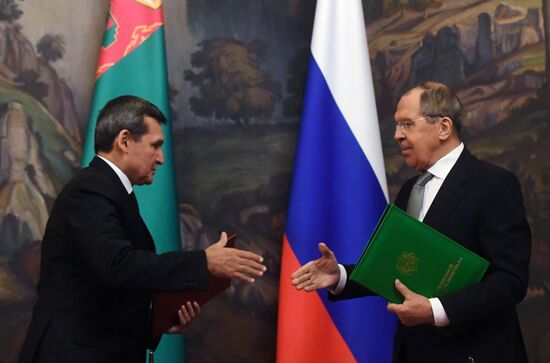 Today in Moscow, Turkmen Foreign Minister Rashid Meredov met with his Russian counterpart Sergei Lavrov. During the meeting, they discussed the situation in Afghanistan and Central Asia, the current level of bilateral relations and priority directions of their development. This was reported by TASS.

The sides exchanged views on building the Turkmen-Russian cooperation in the political, trade and economic, scientific, educational and cultural and humanitarian spheres, regional and international issues. In particular, they stressed the importance of developing multilateral relations between Ashgabat and Moscow within international organizations such as the UN, the CIS, the "Caspian Five" and the "Central Asia - Russian Federation" format.

Russian Foreign Minister Sergey Lavrov paid special attention to the situation in Afghanistan and praised the role of Turkmenistan's peace-loving foreign policy based on the legal status of permanent neutrality in establishing peace in that country. The Russian Foreign Minister also drew attention to the issues related to the security of the Caspian region, and noted with satisfaction the importance of the agreements reached at the sixth Caspian Summit, held in Turkmenistan on June 29.

During the meeting, it was emphasized that it was necessary to increase Turkmen-Russian cooperation in trade and economic sphere by effectively using the available opportunities. It was noted that the turnover between Turkmenistan and Russia made up $474.8 million in eight months of this year. There are plans to further increase this indicator.

In addition, they discussed issues of bilateral cooperation in the fuel and energy sector.

As noted, the scientific and educational, cultural and humanitarian systems are one of the important areas of Turkmen-Russian cooperation. In this regard, it was noted that more than 30 thousand Turkmen students currently study at Russian universities. Work is underway to establish the Turkmen-Russian University in Ashgabat.