The Turkmenistan Commission for UNESCO held a meeting 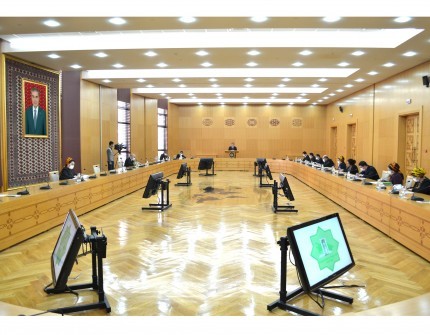 The National Commission of Turkmenistan for UNESCO held a regular meeting. The event, which was attended by the deputies of the Turkmen Cabinet of Ministers, as well as heads and delegates of ministries and departments, was held in the building of the Foreign Ministry of Turkmenistan.

Speaking at the meeting, Rashid Meredov, Deputy Prime Minister and Head of the Turkmen Ministry of Foreign Affairs, focused on the key vectors of Turkmenistan-UNESCO partnership. The diplomat once again spoke about the need to increase cooperation with the Organization in the future.

During the meeting of the National Commission, quite a few topics were discussed, both topical and promising. Among other things, the importance of Inclusion of the Turkmen national dutar technique and the ability to play it in song into the Representative List of the Intangible Cultural Heritage of Humanity. Turkmenistan was also discussed as a member of the Executive Board of the Intergovernmental Oceanographic Commission of UNESCO until 2023 and the Intergovernmental Council of the Interstate Hydrological Programme until 2025.

They also discussed the progress of works on the inclusion of a number of arts, which have been preserved for centuries by the Turkmen nation, into the Representative List. These include Akhal-Teke horse breeding and breeding of the Turkmen Alabai dog breed. Mutual cooperation with UNESCO on the Creative Cities Network project, including the entry of Ashgabat into the UNESCO World Network of Creative Cities in the "Design" category, was also discussed.

The need to intensify activities aimed at the preparation of Turkmenistan's proposals for inclusion in the UNESCO register of programs in the category "Man and the Biosphere" and "Memory of the World" was emphasized.

They also reviewed cooperation between Turkmenistan and UNESCO in the field of science and education, as well as the work plan of the National Commission of Turkmenistan for UNESCO for the current year.