The joint group of Turkmenistan and Tatarstan held its seventh meeting 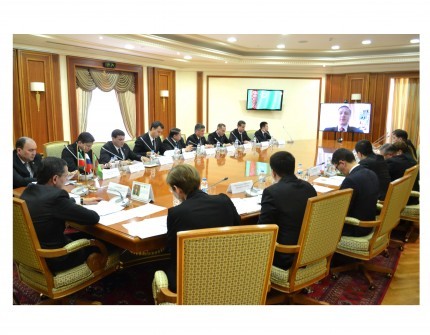 The joint group of Turkmenistan and Tatarstan on interaction in trade-economic, scientific-technical and cultural spheres held its seventh meeting. In addition to members of the group, the meeting was attended by delegates from a number of relevant ministries and departments of both sides. The meeting was attended by co-chairmen of the group - Head of the Ministry of Finance of Turkmenistan M.Serdarov and Vice Prime Minister, Head of the Ministry of Industry and Trade of the Republic of Tatarstan of the Russian Federation A.Karimov.

The participants of the meeting reviewed an extensive list of issues relating to the key areas of the Turkmen - Tatar partnership. The sides also discussed implementation of the agreements reached on the basis of the previous meetings of the working group. Significant progress was noted in advancing the relations between Turkmenistan and Tatarstan.

The parties noted the enormous opportunities for expanding mutual cooperation in the trade and economic sphere as well as the need to strengthen the partnership. For this purpose, the parties proposed to increase foreign trade turnover, create an environment conducive to the interaction of economic entities and implement mutually beneficial projects by mutual efforts.

The positive experience of long-term productive cooperation in oil and gas industry and industrial sphere, as well as prospects for its expansion were noted. The parties stressed the readiness of further cooperation of Turkmenistan and Tatarstan companies in industrial and oil and gas fields.

The list of other issues of Turkmen-Tatar cooperation in educational, agricultural, cultural, sports, environmental and many other areas of mutual interest was also discussed.

The results of the meeting of the Joint Turkmen-Tatar Working Group were reflected in the relevant protocol signed by both sides.