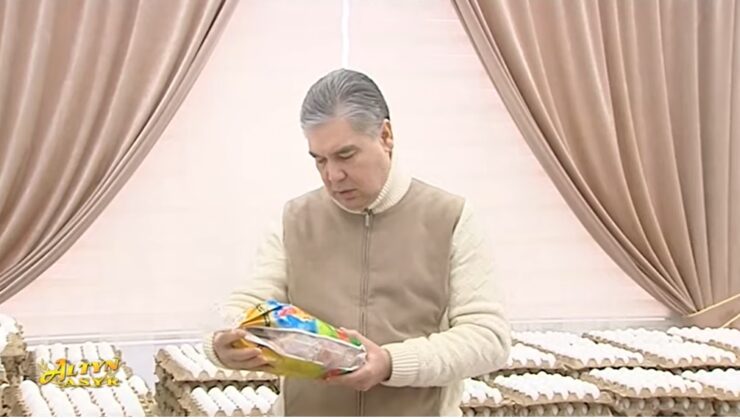 President of Turkmenistan Gurbanguly Berdymukhamedov visited the Işewür topar enterprise in Dashoguz. The head of state got acquainted with the activities of the farm's poultry complex located in Goroghly etrap. On the occasion of the high-ranking guest's visit, the farm organized an exhibition of products produced by the complex, as well as a demonstration of bird species raised at the Işewür topar farm.

The Turkmen leader asked questions about the keeping of birds, in particular young birds, procurement of feed, advanced technologies used in the work of the complex, the volume of production. The head of the state was also interested. What conditions the poultry breeders work and rest in.

Oremurat Sopiyev, the founder of the Işewür topar farm complex, spoke about its activities. The production of chicken meat and eggs began in 2014. For this purpose, a poultry farm was rented from the local Daikhan community. On its territory, two poultry houses, a warehouse with refrigeration equipment, a slaughterhouse and a number of other facilities required to ensure the full production activity of the combine were built. The farm also received a land plot of 50 hectares, which is used for growing various fodder crops.

Today, the poultry plant has 10,000 chickens of meat breed, 5,000 laying hens and 2,000 turkeys. Each year the farm produces 300 tons of poultry meat. Not so long ago, the farm started to breed quails - so far, there are 1000 birds. The Turkmen leader visited the place where a new species of birds was kept.

Meat produced by HO Işewür topar is sold under its own brand Mahmal ("Velvet"). The name and attractive packaging shades the delicate texture of the meat. It not only has healthy qualities, but also produced in an environmentally friendly environment.

Gurbanguly Berdymukhamedov praised the entrepreneur's activities and advised the members of the Işewür topar cooperative to gradually increase production and diversify the types of products. The President noted that Turkmens had raised various birds since ancient times, but chicken meat and eggs were especially revered. Chicken was included in the list of the seven basic treasures of the ancient Turkmen, and its products were included in the diet as having high nutritional value.

Gurbanguly Berdymukhamedov noted that private poultry farmers perform an important task, making their significant contribution to ensuring food abundance in Turkmenistan. And the state will continue to provide Turkmen businessmen with necessary assistance.

The meeting ended with the performance of the folk destan by the poultry farmers - in gratitude to the Head of State a traditional epic chant characteristic of the northern region of the country was performed.