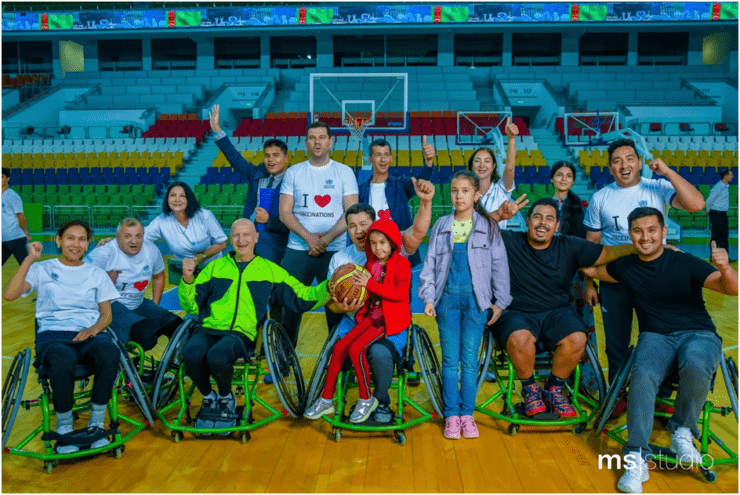 The first inclusive sports festival "We are equal, we are strong," which brought together more than 1,000 participants and spectators, was held last Saturday at the Olympic Sports Complex in Ashgabat.

The event, marking the 30th anniversary of Turkmenistan's membership in the United Nations, was organized by the UN Country Team and non-governmental organizations and the Ashgabat Department of Sports and Youth Policy. The event was supported by the Ministry of Foreign Affairs of Turkmenistan.

The event began with Elchin Gullamov's performance of the song "Blue Eternity," which was followed by a standing ovation and applause from the guests and participants. After that the floor was given to Dmitry Shlapachenko, UN Resident Coordinator in Turkmenistan, who officially opened the Inclusive Sports Festival.

Sports games began with the discipline of goalball, in which blind and visually impaired athletes participated.

The event continued with the drawing of inclusive tournaments in soccer, volleyball and basketball. For all participants of the festival, including children with disabilities, there were master classes in table tennis, rock climbing; entertainment sites with contests in various areas, in which everyone could participate. The atmosphere of the holiday was created by songs and dances on an improvised stage performed by volunteers and artists.

The festival ended with a festive flash mob "Everybody Dance". At the end of the festival there was a ceremony of awarding memorable gifts, cups, medals and souvenirs for the winners and participants of the tournament from the organizers.