During his stay in the capital of the Republic of Mari El the Consul General of Turkmenistan in Russia Atadurdy Bayramov also visited the Turkmen students studying in the universities of Yoshkar-Ola. The diplomat also met with the head of the Republic, Alexander Evstifeev, as well as the rector of Mary State University (Mari State University), Mikhail Shvetsov.

During the talks with the republic's leadership they discussed opportunities for building up Turkmen-Russian partnership at the regional level, including with the Republic of Mari El. The importance of Russian regions located in the Volga-Kama basin in the implementation of partnership projects in the sphere of economy, trade and logistics related to the Caspian Sea area was noted.

Speaking with the administration of Mary State University, the Turkmen diplomat touched on the topic of organizing student exchanges and mutual visits of teachers to higher educational institutions. The rector of the university expressed the intention to double the number of budgetary places for citizens of Turkmenistan, something that will be possible in the next academic year. The sides also reviewed the implementation of the agreements reached during the previous meeting in February.

While at Mary State University, the Consul General also met with students from Turkmenistan who study at this university. The diplomat reminded that the consulate is always ready to fully support the students so that they can get the best quality higher education in Russia. Atadurdy Bayramov appealed to young compatriots to study successfully and actively participate in various activities that are held by the university.

To back up his words, the head of the Consulate General handed the players of the team, formed at Mari State University from Turkmen students, uniforms and equipment. At the end of the ceremony a friendly match was held, which ended with a score of 5:5.

Turkmenistan's diplomatic representative in the Russian Federation also expressed readiness to help form a dance group and a volleyball team on the basis of Mary State University.

A total of 500 Turkmen students receive education in the Republic of Mari El's higher educational institutions - half of them chose Mary State University. 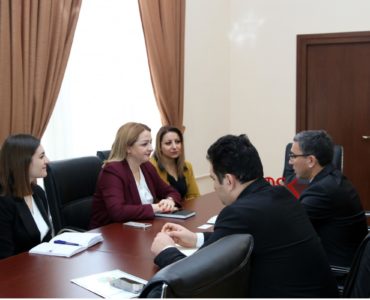