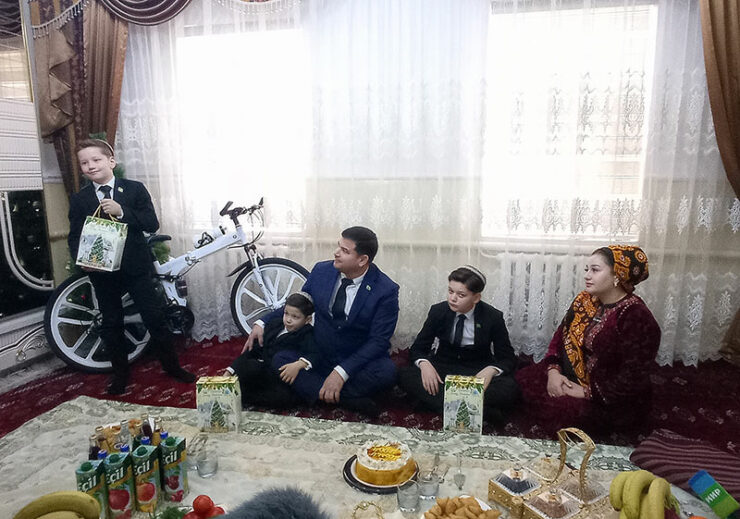 A real miracle happened on New Year's Eve. Already in the morning, fairy-tale guests - Ayaz Baba and his granddaughter Garpamyk - arrived at the house where the Rustamovs live. Ibrahim greeted the guests with joy, because he expected his letter, in which the boy told them about his dream, would reach the addressee.

Earlier, the boy was lucky to visit the celebrations at the Main Christmas Tree of Turkmenistan and meet the President himself. During the event, Gurbanguly Berdymukhamedov asked his little compatriot what he asked Ayaz Baba. And the boy said that he wanted to be photographed with the Turkmen leader and also to get a new bicycle.

As a result, the first half of Ibrahim's wish came true during the New Year celebrations - the head of state took a photo with the schoolboy at the Main Christmas tree of the country. The President also promised to fulfill the second half of the wish of the young compatriot.

Ayaz Baba on behalf of the Turkmen leader presented the child with a new bicycle of white color, which made Ibrahim really excited. When asked why white was the color of the bicycle that the boy dreamt of, Ayaz Baba explained that this color symbolizes purity, bright thoughts and desires. And what you wish with all your heart will eventually come true. The Rustamovs' family expressed gratitude to President Gurbanguly Berdimuhamedov for making the child's dream come true.

To find out what this new bike was like in action, Ibrahim went to take it for a spin outside.

This case is just one of a large number of gifts from the Turkmen leader to Turkmen children. The head of state cares about happy childhood of his young compatriots no less than about well-being of all Turkmen people. The new year 2022, which will be held under the slogan "Age of the People with Arkadag", will be no exception.