Turkmenistan and Japan celebrate 30 years of diplomatic relations in 2022 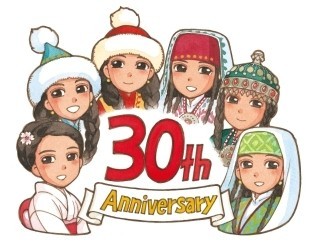 Turkmenistan and Japan will celebrate the 30th anniversary of the establishment of diplomatic relations in 2022. It should be noted that this anniversary is celebrated by several countries of the Central Asian region. In addition to Turkmenistan, the list includes Kazakhstan, Kyrgyzstan, Tajikistan and Uzbekistan. In honor of this significant date, Japanese artist and author of a number of popular manga comics Mori Kaoru created a thematic logo. It became the official logo of the upcoming celebratory event and is available on the website of the Ministry of Foreign Affairs of Japan.

The logo contains a stylized manga image of Japan and the five Central Asian countries. Each of the girls is dressed in her national costume. The author of the image is well aware of the cultures and customs of the countries she depicts, as one of her works is set in Central Asia. Kaworu Mori is one of the famous mangaka at home and her works are officially included by the Ministry of Culture of Japan in the list of the best manga in the history of the genre.

The Japanese Embassy in Turkmenistan also announces that it is accepting applications for the official use of the logo. According to the information provided, Turkmen organizations wishing to hold cultural events on the occasion of the 30th anniversary of the diplomatic relations established between Japan and the Central Asian countries should apply for the official use of the anniversary logo. After the Japanese Ministry of Foreign Affairs reviews the application, the organization will receive permission to use it.