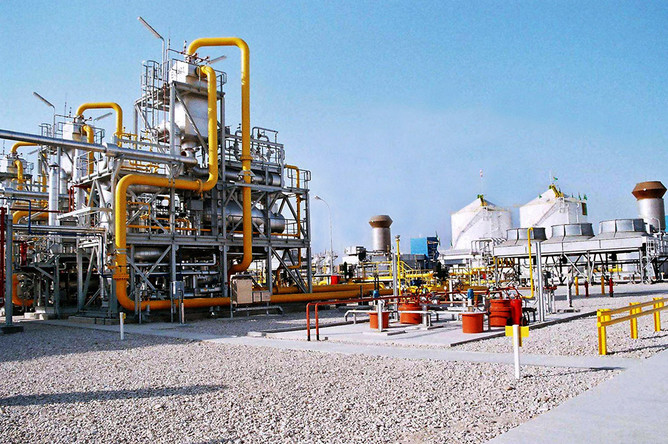 Turkmen President Serdar Berdymukhamedov paid a working visit to Mary province. The Turkmen leader visited the Galkynysh gas field, which has huge natural gas reserves.
President Serdar Berdymukhamedov asked about the work being done here and the introduction of modern innovative methods in the structures of the processing industry.
The head of the State Concern "Turkmengaz" B.Amanov demonstrated the relevant drawings and reported on the state of works at the gas field "Galkynysh", capacity of production facilities, stages of construction of wells, development of new wells. It was noted that all necessary efforts are being made for the successful implementation of tasks to fully provide domestic consumers with natural gas and increase the export potential of the industry.
The Turkmen leader familiarized himself with the state of affairs at this important site, stressed the need to open new mines in the country and industrialize them, strengthen the material and technical base of the industry, and instructed to continue work in this direction.
On his way from the helicopter the President of Turkmenistan examined the course of the Karakum River that crosses the territory of velayat. As cold air flows penetrated the territory of our country, ice sheets formed on the river. Therefore, it is necessary to strengthen its banks responsibly, stressed the head of state.
The exploitation of the Galkynysh gas field began in 2013. Its reserves, together with the Yashlar and Garakyol fields, are estimated at almost 27 trillion cubic meters. After the discovery of this giant treasure trove of hydrocarbons, Turkmenistan confidently ranks fourth in the world in terms of natural gas reserves.