The Turkmen Dutar is an intangible cultural treasure of humanity 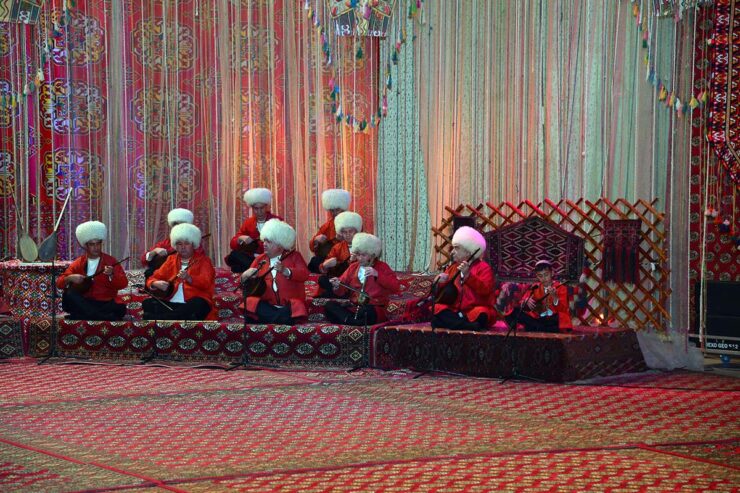 The Turkmen dutar and the art of playing it, as well as the art of bakhshi have been inscribed on the UNESCO Representative List of the Intangible Cultural Heritage of Humanity. On this occasion, an exposition and a solemn conference were organized in the Mukam Palace of the State Cultural Center of the country.

The participants included members of the Turkmen government, heads and delegates of the cultural field, specialized universities, public figures, mass media, as well as people of art.

On this occasion, President Gurbanguly Berdymukhamedov sent a congratulatory message, which was read by Deputy Prime Minister Myahridjemal Mammedova. In accordance with the instructions of the Turkmen leader, a ceremony honoring masters from the capital and provinces of Turkmenistan who have achieved special successes in manufacturing the dutar was held. They were awarded the title "People's Masters of Art".

During the conference the importance of dutar in the musical culture of the Turkmen people was discussed. The art of bakhshi was also described as an example of high professionalism, which has a strong historical basis and, at the same time, continues to improve in our days.

The participants of the congress stressed the importance of literary works on this subject. In particular, books authored by President Gurbanguly Berdymukhamedov dedicated to the representatives of Turkmen music.

The new contest "Play, Dutar!" is also of great importance, designed to popularize the art of making and playing the dutar, as well as the skills of bakhshi all over the world. The competition established in the country will develop patriotic feelings in young people, strengthen mentoring traditions and help to identify talented people.

Visitors to the Palace of Mukams were able to learn more about Turkmenistan's folk music art through an exhibition in the building's foyer. In addition to books, photographs, audio and video recordings, visitors could see the process of creating the dutar with their own eyes.