Ashgabat decorated for the New Year 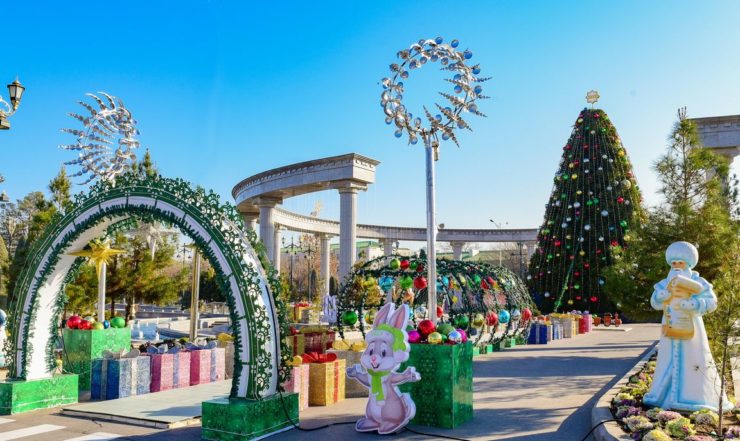 A little less than two weeks remain until the New Year, and preparations for decorating Ashgabat have already been completed. The City of Love (Ashgabat is translated from Turkmen as Ashgabat) has been transformed and illuminated with New Year lights. Beginning from the city districts and coming closer to the central locations almost all squares in front of the buildings were decorated with numerous Christmas trees decorated with balloons and designer figurines of illuminated rabbits - the symbol of 2023. In total, more than 500 were installed in the city. Dimensional toys, light arches, and compositions were placed on all sides of the sites.
When choosing appropriate graphics and creating compositions, not only modern trends, but also the traditions of the country and the motifs inherent in Turkmen culture were taken into account.
The innovations in the decoration of the city include LED lights. The spiraling Christmas trees on both sides of the streets are already popular with Ashgabat residents. Thanks to them, it feels as if you are driving along a hallowed corridor.
You can take pictures in different photo areas, each of which has a specific concept and story. They are located throughout the city, for example in the park Ylham (Inspiration), near the State Circus, in residential areas.
The funniest photo area is installed near the circus building. Fairy-tale characters, made by specialists by hand, and bright graphics and festive lighting will be remembered by both kids and adults for a long time.
Also in Ashgabat for the New Year there is a competition for the best decoration of buildings. About twenty public recreation areas and parks are taking part in the contest.