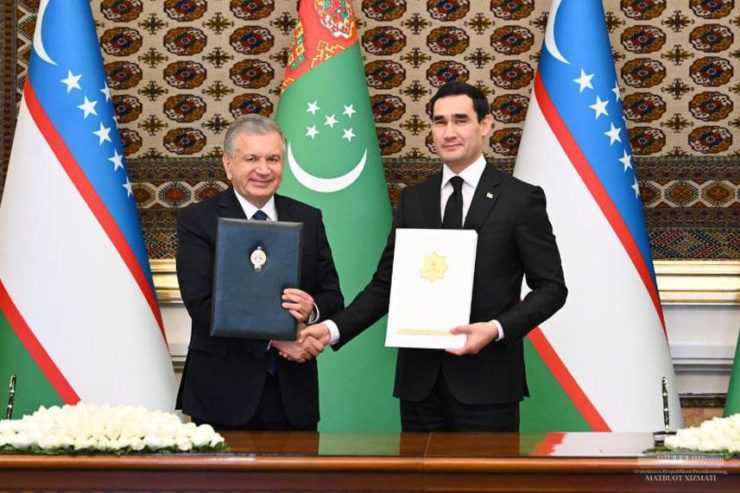 More than 10 documents in various spheres of cooperation were signed between Turkmenistan and Uzbekistan. This was reported by the press service of Uzbek leader Shavkat Mirziyoyev after his talks in an extended format with Turkmen President Serdar Berdymukhamedov in Ashgabat.

In particular, they include the Declaration on deepening strategic partnership, the Plan of practical actions for 2022-2024 on intensification of political dialogue, inter-parliamentary, trade and economic cooperation, cultural and humanitarian exchange between the Republic of Uzbekistan and Turkmenistan.

During the talks, they also discussed further expansion of cooperation in the political, trade and economic, energy, transport and logistics, water, agriculture and other spheres, - explained in the press service.
In addition, the meeting participants thoroughly discussed a number of topical issues of the bilateral agenda and identified areas of practical cooperation between Turkmenistan and Uzbekistan.

The leader of Uzbekistan arrived in Ashgabat on Thursday for an official visit.

This is Shavkat Mirziyoyev's ninth visit to Turkmenistan since 2016, when he was first elected president of Uzbekistan. In terms of the number of foreign visits by President Shavkat Mirziyoyev, Turkmenistan, along with Russia (10) and Kazakhstan (9), is one of the three most visited countries.
Uzbekistan ranks seventh in Turkmenistan's foreign trade. Over the past 4 years, the indicator of trade turnover between the countries has increased by 65%. In 2021, this figure exceeded 880 million U.S. dollars. The countries intend to bring the volume of trade turnover up to 1 billion US dollars.
Turkmenistan buys mineral fertilizers, vegetables, transportation, construction materials, electrical equipment, and sells oil products, polymers, and cotton yarn from Uzbekistan, and began exporting electricity in December 2019.