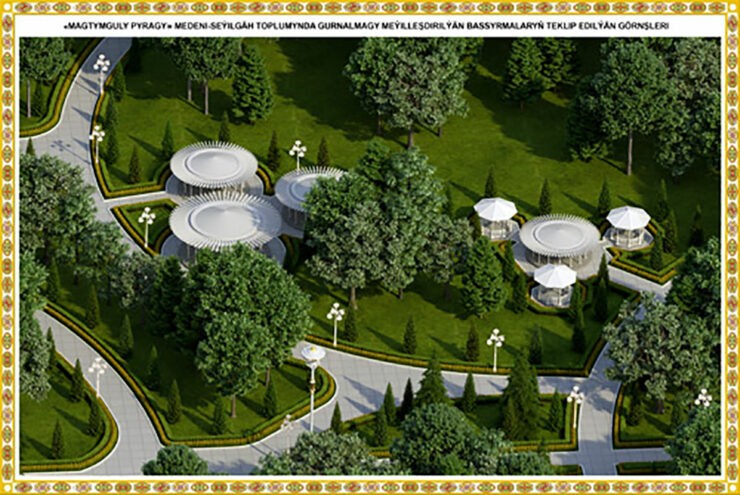 The Makhtumkuli Fraghi Park in the southern sector of the capital of Turkmenistan will be completely reconstructed by June 2022. Specialists of the "Dost gurluşyk, söwda, önümçilik" service company are already carrying out work on the improvement of the park zone located near the Gindivar mountain. Earlier, the architects and designers had worked out a project to expand the park area and as a result, it will occupy 150 thousand square meters. A significant part of it will be planted with greenery - to the already existing plants in the park will be added ten varieties of trees of deciduous and coniferous species. A total of 4.8 thousand trees are planned to be planted in the park. There will also be new lawns and flowerbeds. It is also planned to reroute, pave and lengthen the existing alleys in the park and build new pavilions.

The central part of the park will be adorned by two magnificent fountains, the area of which will be 584 square meters and 382 square meters. Grey granite will be used for their facing. It is also planned to save the existing artificial waterfall, which feeds two open ponds and man-made river. The banks of the latter will be connected by new bridges for pedestrians and vehicles. Modern sprinkler and drip irrigation systems will be used to irrigate the park. The water complex will be supplemented with three reservoirs, the total capacity of which will be 1870 cubic meters. Water from one of them will be used for firefighting, the second - for drinking, and the third - for irrigation.

Small architectural forms in the park - arbors, trash garbage cans, benches - will also undergo renovation. Pedestrian paths will also be paved with granite. More than four hundred masts will be additionally installed for lighting the territory. The arch at the entrance to the park and decorative fountain will be re-lined with gray granite. The cascade with the monument to the First Turkmen President Saparmurat Turkmenbashi will be reconstructed. Completion of reconstruction work is scheduled for June 2022.