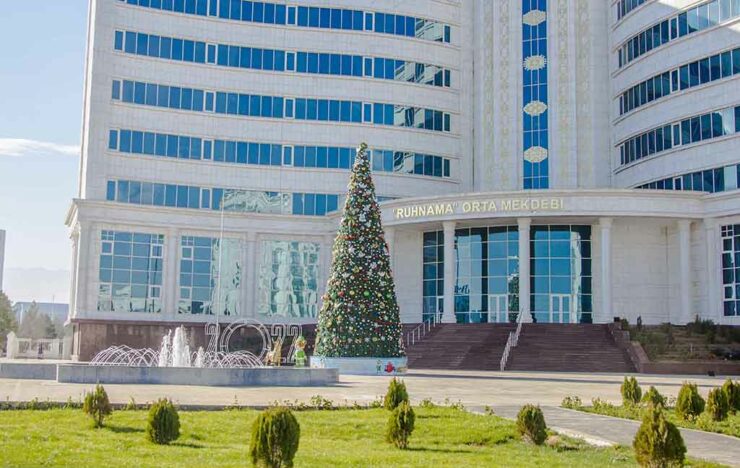 Weather in Turkmenistan in the last week of December and in January 2022 is seen by forecasters as warm and rainy. Only the northern parts of the country will be unlucky in this regard. The last month of the passing year will be warm for almost the whole week. And even the New Year night will not be an exception in this regard. But on Sunday, January 2, 2022, a sharp cold snap and precipitation are expected.

The air in Ashgabat and Akhal velayat will begin to warm up on Monday. On this day we should expect +8°С. On Tuesday it will be even warmer - the thermometers will rise to +11°С. Temperatures on Wednesday and Thursday will reach +10°C, and on the last day of 2021 it will be +13°С. During the night of the same day it will cool down to +8+10°С. On the first day of the new year the air will again warm up to +11°C, but it may rain during the night. On Sunday, it will rain from 2 a.m. to 11 p.m. It is predicted that during this time precipitation will be about 27.8 mm. Temperatures on Sunday will drop to +6°С.

In Balkan velayat from Monday to Thursday, the thermometer is expected to rise to a maximum of +10°С. It will be +12 on Friday°С. New Year's Eve temperature will be in the range of +8+10°С. Saturday afternoon will be maximum +11°C, and on Sunday it will cool down to +9°С.

But the residents of the northern region will feel a breath of winter, albeit weak. Weather forecasters forecast in Dashoguz province on Monday-Wednesday -2-1°С. On Thursday the thermometers will stop at zero. But on the last day of the year it will drop again to -2°С. At night it will get down to -9°С. On Sunday, wet snow is expected and temperatures will reach -1°С.

It will be +8 in Mary province at the beginning of this week°C, but gradually the temperature will rise to +11°С. On Thursday, it is expected to be +16°С. And on Friday during the daytime thermometers will show +17°С. At night it will be a little colder to +11+13°С. But on Saturday it will warm up again to +18°C, but rains are expected on the same day. Precipitation is also forecast for Sunday, and the temperature on that day will be about +12°С.

The beginning of the week in Lebap velayat will be marked by the maximum temperature of +5°C, but gradually it will rise higher and higher. On Tuesday, thermometers will show +9°C, and on Wednesday - about +11°С. On Thursday, expect +12°C, and on Friday afternoon - up to +17°С. Lebapians will meet the New Year's Eve with air temperatures in the range of +10+13°С. On Saturday it will be cooler - about +14°C, and light rain is also forecast. On Sunday it will be even colder - up to +14оC, and there will be heavy rains - about 15.2 mm of precipitation.

As for January, forecasters forecast temperatures within the climatic norm, and in some areas even above the norm. Thus, for Ashgabat the average monthly temperature norm for January is +3.9°С.

The first significant precipitation is forecasted at the beginning of the new year. Up to 80% of the whole monthly norm may fall in the south-eastern regions of Turkmenistan during this period alone. But the volume of precipitation in Ashgabat is expected to be 21 mm, which is normal for this area.