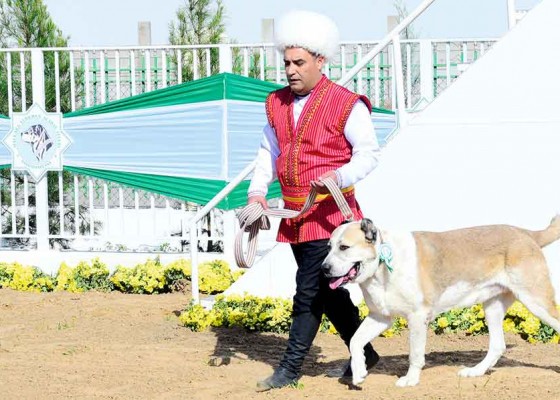 Representatives of the breed were guided through the viewing platform and the obstacle course. The judges evaluated the proportionality of the dogs' physique: height, stretch, wrist circumference, as well as their behavior: calmness, obedience.

The winner of the contest will be one alabai, who will receive a medal, and his owner a passenger car and a passing trophy.

The Turkmen Alabai is one of the oldest dog breeds on Earth. It is from three to six thousand years old. Archaeologists have repeatedly found terracotta figurines of dogs with cropped ears and tail on the territory of the country.

Turkmenistan pays considerable attention to the health and development of Alabais, striving to ensure the purity of the herd and to increase its numbers. Clinics and canine centers are being built in the country. Artists, carpet-makers and sculptors try to depict Turkmen Alabais in their works. In 2020, by the initiative of Turkmen President Gurbanguly Berdymukhamedov, the International Association "Turkmen Alabais" was established. It includes representatives from 25 countries.

The country also intends to include the arts of seizing Akhalteke horses and breeding Turkmen Alabais on the UNESCO List of Intangible Cultural Heritage. One of the books by the Chairman of the Khalk Maslakhaty Milli Gengesh of Turkmenistan

Gurbanguly Berdymukhamedov's book is dedicated to this breed of dog, which has been published in several languages. He also gave puppies of this breed to high-ranking guests, including Russian leader Vladimir Putin.