Turkmenistan has chosen the bravest alabai of the year 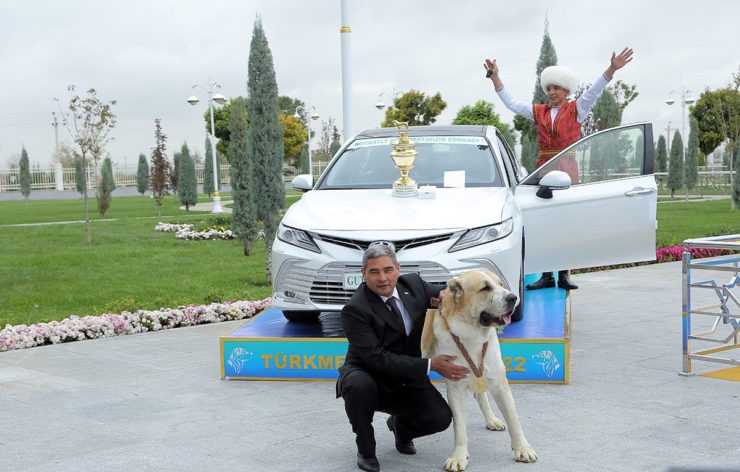 The brave Turkmen alabai dog of the year was chosen in Turkmenistan. The dog named Gonurkhan belonging to the Ministry of Internal Affairs of Turkmenistan was chosen.

The head of state, President of the International Association of Akhalteke Horse Breeding and the International Association "Turkmen Alabai" Serdar Berdymukhamedov presented the awards of the competition.
The neck of the winning alabai was decorated with a special medal, and a representative of the border guard agency was awarded the main prize of the President of Turkmenistan - the keys to a Toyota Camry car and a passing Cup, reports "Turkmenistan: The Golden Age.

The Ýylyň türkmen edermen alabaýy (Brave Turkmen Alabai of the Year) contest was held for the second time on the occasion of the Turkmen Alabai National Day.
It was attended by 10 alabais, selected at the preliminary stages in different regions and departments of the country.

Representatives of the breed were guided through the viewing platform and the obstacle course. The judges evaluated the proportionality of the dogs' physique: height, stretch, wrist circumference, as well as their behavior: calmness, obedience.
The Turkmen Alabai is one of the oldest dog breeds on Earth. It is from three to six thousand years old. Archaeologists have repeatedly found terracotta figurines of dogs with cropped ears and tail on the territory of the country.