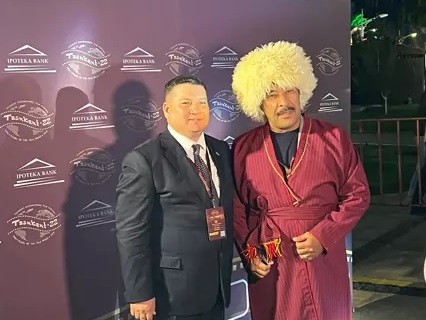 A delegation from the Oguz Khan Turkmenfilm Association arrived in Tashkent to participate in the XIV International Film Festival "Pearl of the Silk Road".

Turkmenistan will be represented at the event, which will last from Sept. 13 to 18, by documentary filmmaker Sakhysalyh Bayramov.
The festival will show the films of Turkmen directors Arslan Eiberdiev "Istarin", "Red Kurte" by Sakhysalykh Bayramov and "At-myrat" by Vepa Ishanguliyev.

This event is a revival of the Tashkent International Film Festival of Asia, Africa and Latin America, held in the capital of Uzbekistan every two years from 1966 to 1988 under the motto "For peace, social progress and freedom of peoples. About 500 producers, film critics, directors, actors and cinematographers from 40 countries will take part in it. 150 feature, documentary and short films will be shown at the festival. More than 20 events related to film production, education and demonstration will take place within the festival, as well as the SCO Cinema Days, World Cinema Days, Documentary Cinema Days, Retro Cinema Days and the Cinema Day of the Republic of Uzbekistan.