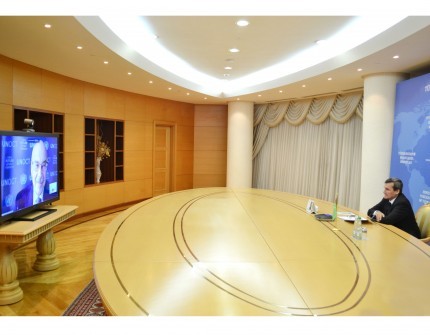 The head of Turkmenistan's Foreign Ministry Rashid Meredov discussed with Vladimir Voronkov, deputy UN secretary general and head of the UN Counterterrorism Department (CTD), issues of counterterrorism, as well as a number of other areas of interaction with the UN and its special agencies. The meeting took place via videoconference.

The talks revealed that Turkmenistan and the UN, as well as the UN specialized agencies have established constructive relations on a wide range of issues with a long-term perspective. The Turkmen Foreign Minister reaffirmed Turkmenistan's unwavering determination to take an active part in fulfilling the UN objectives aimed at strengthening the global system of combating terrorist threats and uniting efforts of all countries and intergovernmental groups in combating terrorism, drug trafficking and other forms of illegal activity.

The two sides separately discussed security issues at both the regional and global levels. In particular, they touched on strengthening mutual cooperation in implementing the UN Global Counterterrorism Strategy at the regional level. This interaction is based on the provisions of the Ashgabat Declaration approved in 2011 and the Plan of joint actions to combat terrorism in the Central Asian region. The readiness to accept the updated Plan of joint activity during the Interstate conference on the occasion of the 10th anniversary of implementation of the Global Counter-Terrorism Strategy in the Central Asian region was confirmed. The event is scheduled for March 3-4 this year. The venue will be the city of Tashkent.

The participants of the negotiations also touched upon the topic of periodic meetings on the basis of multilateral platforms. The Turkmen side made a proposal to consult more actively with the UN KTU on permissible formats of the KTU Program Office in Ashgabat.

The participants also discussed the functioning of the Regional Center for Preventive Diplomacy and its cooperation with the UNCTC, both its current status and future action plan. In particular, they discussed the importance of adoption by the UN General Assembly at the upcoming 76th session of the draft resolution on strengthening regional and global partnership for the sake of stability and progress in the Central Asian region.

The head of Turkmenistan's Foreign Ministry reaffirmed the government's commitment to further strengthening the culture of peace and trust in interstate relations. On this issue, the Turkmen Foreign Minister told his interlocutor about President Gurbanguly Berdimuhamedov's initiative called "Dialogue is a guarantee of peace".