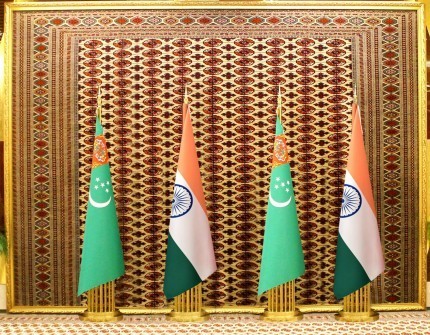 The foreign ministers of Turkmenistan and India held a telephone conversation during which they discussed preparations for the first online "Central Asia-India" summit. In addition, Turkmen Foreign Minister Rashid Meredov and his Indian counterpart Subramanyam Jaishankar discussed a wide range of bilateral cooperation topics.

The sides noted that Turkmenistan, as well as India attach great importance to expanding and deepening the various mutually beneficial trade and economic relations, interaction in the humanitarian and cultural spheres, as well as diplomatic and political contacts. Diplomats stressed the need for rapid implementation of high-level agreements reached recently. This applies primarily to personal meetings and telephone conversations of Turkmen leader Gurbanguly Berdimuhamedov with his Indian counterpart Ram Nath Kovind, as well as with Prime Minister Narendra Modi.

In this context, the Foreign Ministers of Turkmenistan and India exchanged views on the implementation of the TAPI gas pipeline project, stressing the need to intensify work, both bilaterally and multilaterally.

The diplomats also paid close attention to the preparations for the First Central Asia-India Online Summit, which is scheduled to be held in the near future by videoconference.