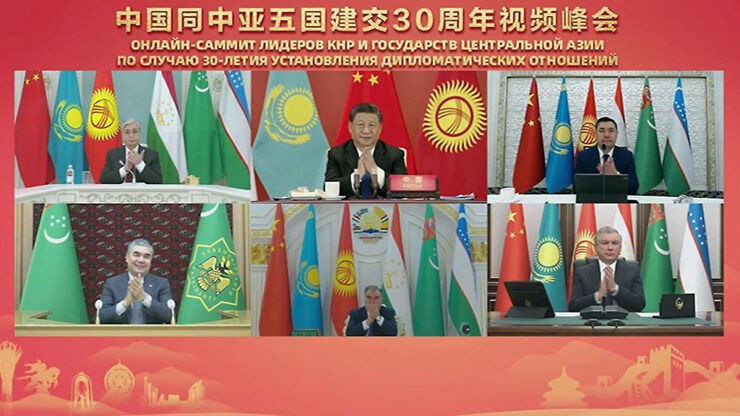 Today, January 25, 2022, a summit was held in video format on the thirtieth anniversary of establishment of diplomatic relations between the People's Republic of China and Central Asian states, including Turkmenistan. Presidents of Turkmenistan, Kazakhstan, Uzbekistan, Tajikistan, and Chairman of the People's Republic of China evaluated the dynamics of interaction based on traditions of respect, friendship, good neighborliness, and mutually beneficial cooperation. The results of joint projects were summarized.

The Chinese leader emphasized during his speech that China is ready to open a large-scale market for imports of high quality goods and agricultural products from Central Asian countries. The Chinese side proposed to establish a dialogue in the field of electronic trade and organize a forum for industrial and investment partnership. The importance of the stability of the gas pipeline of PRC-CA and the expansion of comprehensive energy cooperation was highly appreciated. Separately, the results of cooperation in the field of AI, big data, and cloud computing were mentioned.

The Chinese side will continue to supply vaccines and anti-epidemic agents to the Central Asian region. It is planned to carry out joint production of vaccines and transfer a number of technologies in this area. Xi Jinping noted that in 2022 China will provide 50 million doses of vaccines for the states of Central Asia.

During the coming five-year term, students of the Central Asian Five will receive 1,200 Chinese government scholarships. A joint Youth Cultural Festival will be held.

The leaders of the Central Asian states noted the high importance of holding this summit and expressed their unwavering commitment to mutual support in a number of issues. It was noted that the establishment of diplomatic relations between the participating countries and China was a new starting point for strengthening the strategic partnership. The national leaders emphasized their desire to attend the opening ceremony of the Winter Olympics in Beijing on February 4, 2022.