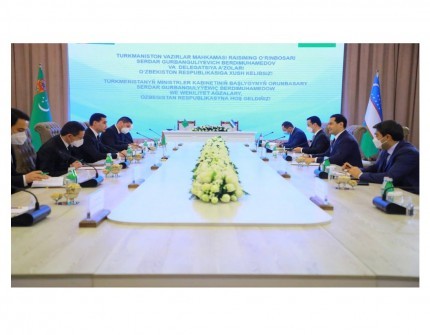 Representatives of the Government of Turkmenistan, during an official visit to Tashkent, met with the leadership of Uzbekistan. Head of the Turkmen delegation, Vice Prime Minister for Financial and Economic Affairs Serdar Berdymukhamedov, met with Uzbek leader Shavkat Mirziyoyev. The parties exchanged warm greetings and wishes and stated that the current Turkmen-Uzbek relations are dynamically developing and strengthening. The confidential high-level political dialogue has greatly contributed to this.

During the visit of the Turkmen delegation, the Deputy Prime Minister of Turkmenistan S.Berdymukhamedov met with the Deputy Prime Minister, Head of the Investment and Foreign Trade Ministry of Uzbekistan S.Umurzakov. The interlocutors discussed an extensive list of issues of Turkmen-Uzbek interaction in such areas as political, trade and economic, cultural and humanitarian. The sides also emphasized the close cooperation of both countries in the global arena within the framework of regional and interstate formations.

Separate attention was paid to issues of trade and economic interaction. Both sides expressed interest in enhancing mutual trade and its diversification. Formation of a border trade zone between Turkmenistan and Uzbekistan will contribute to this, in particular. This issue was agreed upon during the official visit of Turkmen leader Gurbanguly Berdimuhamedov to Tashkent in early October 2021. Transport and energy sectors are among the priority vectors of Turkmen-Uzbek cooperation, as before.

The Turkmen government delegation also held a meeting at the Ministry of Health of Uzbekistan, during which current issues of mutual cooperation in the field of health were discussed. The need to share experience in preventing infectious diseases was also noted.

In addition, SPPT delegates met in Tashkent with representatives of Uzbekistan's business circles, which resulted in a number of bilateral agreements related to individual entrepreneurship.

The participants of the consultations discussed the status and prospects of Turkmen-Uzbek relations. It was noted that high-level visits play a key role in their promotion.

Representatives of the foreign ministries of both countries also considered issues of mutual cooperation in the international arena, as part of regional and global formations. They also discussed the Afghan situation and the ways of its normalization. Much attention was also paid to the trade and economic sphere and the Turkmen-Uzbek cooperation. The diplomats also discussed a wide range of issues relating to all major areas of mutually beneficial partnership, its strengthening and expansion.