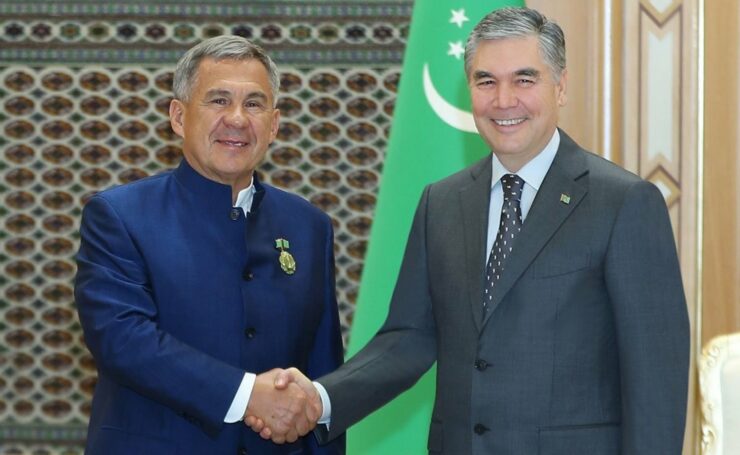 Expert CentralAsia.news Yuri Aronsky in his review also analyzed the progressive development of partnership between Turkmenistan and the subjects of the Russian Federation.

Turkmen leader Gurbanguly Berdymukhamedov gave an interview to a journalist of the interstate TV and radio channel "Mir", which should be described as a political phenomenon of historical significance. In this interview, the President of Turkmenistan reaffirmed the peaceful foreign policy of his country, which aims to strengthen and increase multifaceted interstate cooperation aimed at the common welfare and progress.

Mutually beneficial relations with old, reliable partners, including the subjects of the Russian Federation, are also gaining a second wind. President of Turkmenistan Gurbanguly Berdimuhamedov held talks with the Russian President of the Republic of Tatarstan Rustam Minnikhanov in Ashgabat on May 17 last year. The politicians have substantially discussed the fundamental vectors of effective cooperation for both the foreseeable and long-term perspective.

Later, President Berdymukhamedov met with heads of Russian regions twice more. On September 26, the Turkmen leader received Governor of St. Petersburg Alexander Beglov. The official was invited as a guest to the celebrations to mark the 30th anniversary of Turkmenistan's independence. During the talks, the sides discussed practical steps to put the agreements reached earlier into practice. These included the steps outlined in the "Road Map" of trade and economic, cultural and humanitarian and scientific and educational interaction for the period until 2025. This document was signed in February 2020.

On December 9, the head of Turkmenistan met with Governor of Astrakhan Igor Babushkin in Ashgabat. The sides touched upon a number of topics, including the use of Turkmenbashi International Sea Port, which may soon become very popular. At the same time, the sides discussed the relevance of regular cargo and passenger visits to the ports of some countries with access to the Caspian Sea. These include the Russian port of Olya, located on the territory of the Astrakhan region.

Governor of Astrakhan I. Babushkin cordially thanked the Turkmen leader for the attention he pays to building Turkmen-Astrakhan cooperation and for the humanitarian assistance Turkmenistan has provided to the region he heads to effectively counteract COVID-19.