In Turkmenistan, students who took an active part in the design of the city of Arkadag were awarded 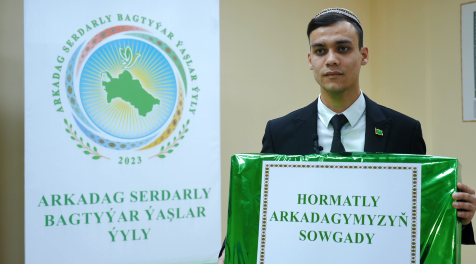 In Turkmenistan, students who took an active part in the design of the city were awarded Arcadag Akhal velayat. On behalf of the country's leadership, they were presented with souvenirs. This was reported by the news program "Vatan" of Turkmen television.
In addition to students and teachers of universities, the ceremony was attended by deputy chairmen of the Cabinet of Ministers of Turkmenistan and representatives of the media.

The construction of the new, modern administrative center of the Akhal velayat began almost four years ago. The idea of attracting students from Turkmenistan's universities to the construction and design works belongs to the former president of Turkmenistan, Gurbanguly Berdymukhamedov.

Gochmammet Churiyev, a fifth-year student of the architectural department of the Turkmen State Academy of Arts, was among the awardees. His design and engineering works have been awarded prizes in a number of competitions at the state level.

His drafts of city development projects, which are not inferior to those in the capital, were highly appreciated by Gurbanguly Berdymukhamedov.

Turkmenistan attaches special importance to the spiritual, moral, cultural, educational and physical development of young Turkmens, creating favorable conditions for them to receive a decent education and upbringing.