The vectors of Turkmenistan's foreign policy for 2022 are presented in Geneva. 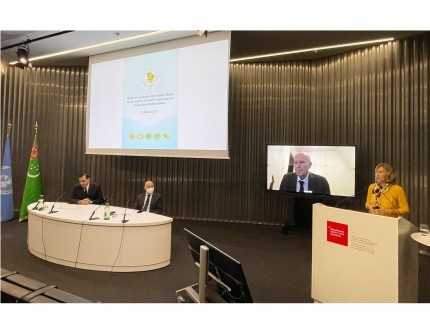 The Permanent Mission of Turkmenistan to the United Nations Office in Geneva organized a briefing on Turkmenistan's foreign policy priorities and agreements for 2022 and beyond. The event was held at the Graduate Institute of Interstate Studies and Development in Geneva, Switzerland. The participants were heads and delegates of diplomatic missions accredited in Geneva and interstate formations.

The briefing is a continuation of Turkmen leader Gurbanguly Berdymukhamedov's initiative "Dialogue is a pledge of peace" and also corresponds to the state motto of this year "The era of the people with Arcadag".

The event focused on the results of 2021, which was proclaimed the International Year of Peace and Trust. The sides also discussed major events of interstate significance that took place in Turkmenistan - these events were a milestone in the development of cooperation, both regionally and globally. These events included the Consultative Congress of Heads of State of the Central Asian region and the 15th ECO Summit.

The promotion of Turkmenistan's world initiative "Dialogue is a pledge of peace" is intended to consolidate the efforts of the international community to strengthen the peaceful and trusting coexistence of all peoples of the world and to confirm peace and trust in inter-state relations worldwide.

It was stressed that the slogan under which Turkmenistan would pass this year was another confirmation of the fact that the people of Turkmenistan are determined to continue the ongoing reforms in the country, aimed at implementing all orders and tasks that were initiated by President Berdimuhamedov.

During the briefing, participants were briefed on the main vision of Turkmenistan, which was voiced by the Turkmen leader during his speech at the 76th session of the UN General Assembly.

The awarding of commemorative medals of Turkmenistan on the occasion of the 25th anniversary of its neutral status concluded the event. The medals were awarded to Ms. Olga Algayerova, UN Deputy Secretary General and Executive Secretary of the UN European Economic Commission, and Mr. Francis Gurry, former Director General of the World Intellectual Property Organization (WIPO) (the medal was presented through Ambassador and Permanent Representative of Australia to WTO George Minu).