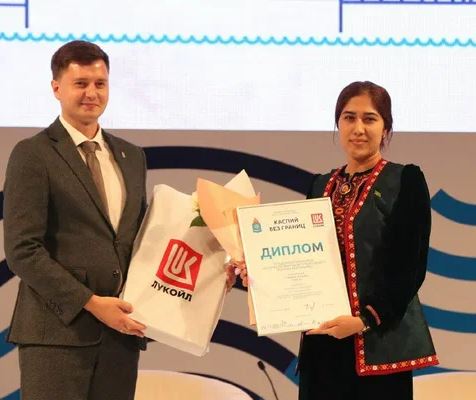 Aigul Rakhimova, a correspondent for the newspaper Turkmenistan Aigul Rakhimova won the international journalistic contest "Caspian Without Borders," which was held in Astrakhan as part of the Caspian Media Forum.

Aigul received an award for her material "Initiatives spreading peace in the world find their reflection on the friendly shore of the Caspian Sea" in the category "Fresh Look".

Leonid Kiyashko, a journalist from Media Turkmen, also took second place in the nomination "Man and the Sea" for his material about the rescue of the Caspian seal.

This year the contest received 160 applications from 44 participants from Azerbaijan, Iran, Kazakhstan, Russia and Turkmenistan. Traditionally, the contest was held in 5 categories: "PhotoCaspian", "Man and Sea", "Discovering the Caspian countries", "Caspian - territory of health", "Fresh Look".

The contest among the journalists of the Caspian Sea countries is held for the ninth time (until 2017 it was called "Caspian Dream"). The organizer of the contest is the administration of the governor of the Astrakhan region.