Presidents of Turkmenistan and Turkey to discuss energy issues in Ankara 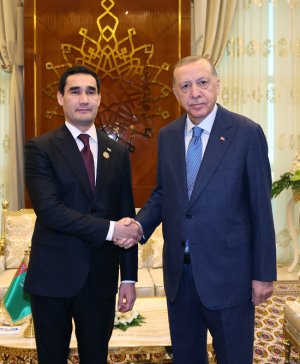 Turkey will become an important hub for sending Turkmen gas to Europe. This was reported by Anadolu Agency with reference to the interview of Recep Tayyip Erdogan to Turkish journalists after the first trilateral summit of the heads of states of Turkmenistan, the Republic of Azerbaijan and the Republic of Turkey, which was held in Avaza.

According to Erdogan, the delivery of Russian and Turkmen gas to Europe via Turkey will be an important step in the global energy sphere. In addition, the Turkish president noted that the Trans-Caspian gas pipeline was discussed at the Avaza summit, and that financial issues related to the implementation of this project should be decided with the participation of officials from Turkmenistan, Azerbaijan, Turkey and Brussels, if the European Union wants to join the project.

Erdogan also said that he instructed the Turkish Energy Minister to begin practical actions with his counterparts from Azerbaijan and Turkmenistan. Turkish President reminded that the President of Turkmenistan will pay an official visit to Turkey in early 2023, and stressed that during this visit there will be important talks on the issue.