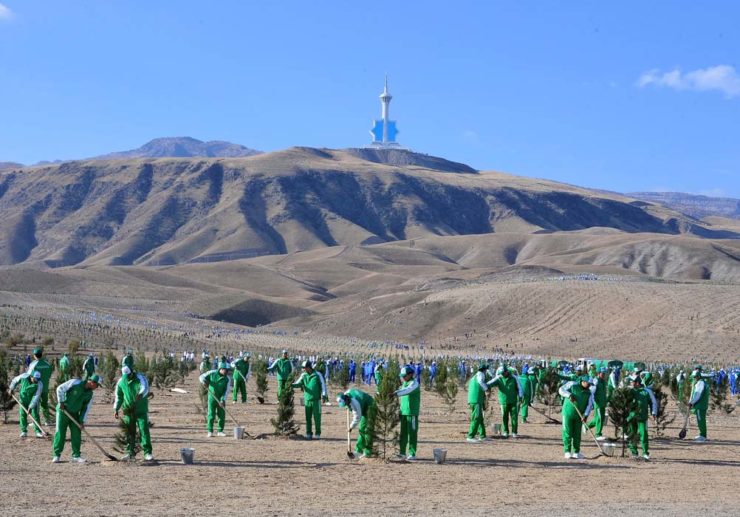 Turkmenistan has begun its autumn tree-planting campaign. President Serdar Berdymukhamedov personally launched the nationwide tree planting campaign.
Mass planting of trees takes place in Turkmenistan once every six months - in the fall and spring seasons. Each year, 3 million seedlings of trees are planted nationwide, among which there are both deciduous and coniferous species, as well as - fruit crops.
In Ashgabat the tree planting action took place in the foothills of the Kopetdag Mountains in the territory of the new park complex around the Makhtumkuli monument under construction. Members of the government, parliament, heads and representatives of ministries and departments, foreign ambassadors, students and residents of the Turkmen capital took part in the tree planting along with the head of state.
The current campaign is part of the systematic environmental work in Turkmenistan aimed, among other things, at addressing the problems of climate change. Traditionally, three million trees are planted in the country every year. However, the years of 2020 and 2021 will be record-breaking in this regard. So, in 2020, in honor of the 25th anniversary of neutrality 25 million trees were planted, and last year, on the occasion of the 30th anniversary of independence 30 million trees were planted.
Mass tree planting took place in all regions of Turkmenistan. Green urban areas and forest areas in the country are increasing. In recent years, on the initiative of former President Gurbanguly Berdymukhamedov, 145 million trees have already been planted.