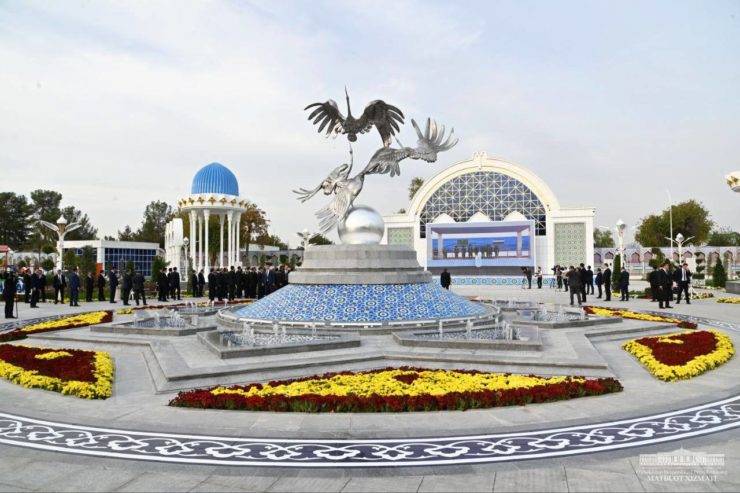 Presidents Serdar Berdymukhamedov and Shavkat Mirziyoyev, as well as members of the government and parliament of Turkmenistan, elders and ordinary Ashgabat residents attended the opening ceremony.
The construction of the park started a little more than a year ago. The construction was carried out by Turkmen specialists. On an area of about 30 thousand square meters, more than twenty objects imitating the sights of the Uzbek capital were built, a landscaped garden with lush greenery of plants, flower beds and paths was created.
The monumental Arch of Ezgulik (Arch of Good and Noble aspirations) is placed at the entrance. In Tashkent, the entrance to Independence Square is decorated with such an arch.
The main fountain is built on the main alley starting at the central arch, two more fountains in the national style are built in the continuation of the alley, and at the end of the alley - a platform with a stage for cultural events. These objects will be decorated with multicolored ceramic tiles with Uzbek ornaments and patterns.
Many of the park's objects use the pattern of intersecting squares, folding into a pattern and forming an octagonal star. In particular, it will ornament the tiles of the main avenue, walkways, and the domes of four rotundas - round structures with benches and columns, designed for visitors to rest.
At the entrance and in the central part of the two-storey teahouse are unique architectural landmarks of the park - fountains with sculptures, in the form of a teapot with a teapot. Chaikhana can accommodate up to 100 visitors. One of the peculiarities of the institution is a view of the central alley of the park, where an exact copy of a unique structure of the Tashkent capital - its TV tower of Uzbekistan - is erected.
Simultaneously with the walking area, a play area was created in the park. In the shade of trees there is a playground for small children, amusement rides and a Ferris wheel.
One of the attractions of the new park is the Healthy Lifestyle Center, an analog of Babur Ecopark, which opened in Tashkent several years ago. Here, as in the capital of Uzbekistan, there are a variety of sports fields and paths, equipped with playgrounds with slides, swings, mazes and rope ladders. Here you can play mini soccer and volleyball, tennis and badminton, train on fitness equipment, go running, roller or bike. The existing wedding reception building in the former Gunesh Park has also been renovated and will continue to host guests as before. A parking lot for dozens of cars adjoins the park.